Links
Posted by Lanny Wolfe Inspiration Of The Week at 4:36 PM No comments: 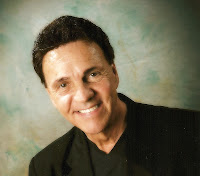 Any time a person has any part of their physicality or personality that other people easily pick up as a "handicap," a "detriment," or a "negative" to a person's personality, so many times that "handicap/detriment or negative" defines a person . . . from the time they are a small child. How many times does the . . . A small child who becomes a hostage to a wheechair many times doesn't even get referred to by his real name, but someone may easily refer to that child as the "crippled child who lives down the street." Unfortunately a part of the child's being summarizes his total being to some who don't necessarily want to be hurtful but find it easy to define the child by allowing one aspect of the child's "totality" to become the definition of the child.

The list goes on and on . . . a child who is short, or tall, or very short, or very tall, or is skinny, or overweight, or fat, or obese, has thin hair, has thick hair, has no hair, has a big nose, or eyes that are wide apart, or a girl who has a very high voice, or very low voice, or a boy who has a very high voice, or a very low voice, a child who dresses "out of the norm" for what his classmates are dressing . . . etc., etc., etc., We seem to not notice the "average," the "norm!" It's anyone who deviates from the "norm" that gets caught in the crosshairs of our radar screen . . . and, all too often becomes the center of conversation by their peers. It doesn't take any child very long at all to get the drift that they deviate from the "norm." Far too often, their entire being becomes characterized by one thing that makes them deviate from the norm. Some kids grow up and all of their life live with a nickname such as "Shorty!" Some folks try their best to take all of this in stride; many do not. Some children who become harassed for their "differences" have even committed suicide because they just couldn't take the bullying or pressure of not being accepted by their peers. The flip side of this situation is when a kid . . . or a grown up takes their "difference" or handicap and capitalizes on it and many times becomes well-known, famous, and even rich, because they decided to make their "negative" a "positive."

Whether from the city or country, we've all grown up in a "Hollywood" society that would like to make you think that every movie is all about the "leading" man and "leading" woman. And, if you don't have the stuff to qualify you to audition for that stereotype, then you don't have it; you're a loser. I've often thought, whether it be a movie, a TV entity, a Broadway musical, or a novel . . . it would be very boring if all there were in the cast were a "leading man" and a "leading lady." The bottom line is it takes all kinds of people to make a movie, a musical, a book novel, etc.--older people, overweight folks, some downright ugly, some funny, some eccentric, some unusual in some way that the writer, director knows is very important in adding "comic relief, etc." Yes, there's room in our world for clowns! . . . and all kinds of folks . . . who deviate from the "norm."
You'll probably think of a lot of folks that I won't remember at the moment. However, I'm reminded of the fact that we don't know of Zacchaeus, in the Bible because he was short! (his negative) . . . we only know of him because he did something about his being short! (making his negative work for his good!) He capitalized on his "negative" . . . and climbed up in a tree to see Jesus! The fact that he climbed up in a tree is the only reason why every Sunday School child ever knew about him. If you have time watch this animated film about Zacchaeus; you'll be reminded that, because, he capitalized on his "short "coming, he was noticed by the master; and, because of it, he found salvation.


So, where do you and I come in! Are we in the "status quo" or is there something about us that veers from the "norm." Do you have something that maybe you've considered a "thorn" in your being; something that you've allowed to define you to the point that you've allowed "it" to be your definition, or perhaps your legacy in life. Or, have you been able to capitalize in some possible way to take a "negative" input in your makeup make it work for your good. God, who made you, made you as He intended; it's your job to take what the potter put on the wheel and seek His will on how best to be the best that He intended for you to be. At the end of the day, your "negative" might actually be a blessing in disguise. Let me share someone's "lemons to lemonade" story with you.


Let me tell you, Jesse hated this job. And you would too, I imagine, if you had to do it. Jesse was a chicken plucker. That's right. He stood on a line in a chicken factory and spent his days pulling the feathers off dead chickens so the rest of us wouldn't have to. It wasn't much of a job, but at the time, Jesse didn't think he was much of a person.
His father was a brute of a man. His dad was actually throught to be mentally ill and treated Jesse rough all of his life. Jesse's older brother wasn't much better. He was alwayspicking on Jesse and beating him up. Yes, Jesse grew up in a very rough home in West Virginia. Life was anything but easy. And he thought life didn't hold much hope for him. That's why he was standing in this chicken line, doing a joy that few people wanted.
In addition to all the rough treatment at home, it seems that Jesse was always sick. Sometimes it was real physical illness, but way too often it was all in his head. He was a small child, skinny and meek. That sure didn't help the situation any. When he started to school, he was the object of every bully on the playground. He was a hypochondriac of the first order. For Jesse, tomorrow was not always something to be looked forward to.
But, he had dreams. He wanted to be a ventriloquist. He found books on ventriloquism. He practiced with sock puppets and saved his hard earned dollars until he could get a real ventriloquist dummy.
When he got old enough, he joined the military. And even though many of his hypochondriac symptoms persisted, the military did recognize his talents and put him in the entertainment corp. That was when his world changed. He gained confidence. He found that he had a talent for making people laugh, and laugh so hard they often had tears in their eyes.  Yes, little Jesse had found himself.
Be reminded, the history books are full of people who overcame a handicap to go on and make a success of themselves, but Jesse is one of the few I know of who didn't overcome it. Instead he used his paranoia to make a million dollars, and become one of the best-loved characters of all time in doing it!
Yes, that little paranoid hypochondriac, who transferred his nervousness into a successful career, still holds the record for the most Emmy's given in a single category.  The wonderful, gifted, talented, and nervous comedian who brought us Barney Fife was . . . 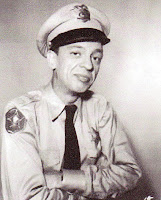 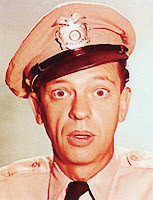 NOW YOU KNOW, "THE REST OF THE STORY"
P.S. Before America's Got Talent '09, who knew a chicken catcher from Kentucky named Kevin Skinner. Well, as you might already know, he was the winner . . . and won one million dollars.

Posted by Lanny Wolfe Inspiration Of The Week at 6:58 AM No comments:

Lanny Wolfe Inspiration Of The Week